Evliya Çelebi and the Leopold Taler

Here’s an entertaining description of Holy Roman Emperor Leopold I; who lived from June 9, 1640 to May 5, 1705; given by Evliya Çelebi, an Ottoman traveler who visited Leopold’s court at Vienna in 1665:

One may almost doubt whether the Almighty really intended, in him, to create a man …

He is a young man of medium height, beardless, narrow-hipped, not really fat and corpulent, but not exactly haggard.

By God’s decision he has a bottle-shaped head, pointed at the top like the cap of a dancing dervish or like a gourd pear. His brow is flat as a board and he has thick black eyebrows, set far apart, under which his light brown eyes, round as circles and rimmed with black lashes, gleam like the orbs of a horned owl. 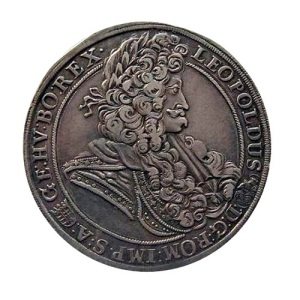 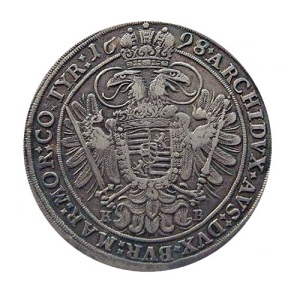 His face is long and sharp like a fox, with ears as big as children’s slippers, and a red nose that shines like an unripe grape and is as big as an eggplant from Morea. From his broad nostrils, into each of which he could stick three fingers at a time, droop hairs as long as moustachios of a 30-year-old swashbuckler, growing in confused tangles with the hair on his upper lip and with his black whiskers, which reach as far as his ears. His lips are swollen like a camel’s and his mouth could hold a whole loaf of bread at a time. His teeth too are as big and as white as a camel’s. Whenever he speaks, the spittle spurts and splashes over him from his mouth and camel lips, as if he had vomited. Then the dazzlingly beautiful page boys who stand by him wipe away the spittle with huge, red handkerchiefs. He himself constantly combs his locks and curls with a comb. His fingers look like cucumbers from Langa.

By the will of the Almighty God, all the emperors of this house are equally repulsive in appearance. And in all their churches and houses, as well as on their coins, the emperor is depicted with this ugly face; indeed, if any artist depicts him with a handsome face, he has that man executed, for he considers that he has disfigured him. For these emperors are proud and boastful of their ugliness.*

Princeton historian Bernard Lewis notes that Çelebi’s purpose was to entertain as much as inform. The description certainly is entertaining, although comparing the emperor’s features to various objects, animals, fruits and vegetables is also quite contemptuous. (Lese-majeste was taken more seriously back then.)

But Lewis also dismisses Çelebi’s words as “obvious caricatures.” Were they? If you look at a 1698 silver Taler like the one shown above while reading, you might conclude that Çelebi’s description, while exaggerated for entertainment value, was actually fairly accurate. Prognathism was a well-known hereditary trait of the House of Habsburg.

Regardless of Dr. Lewis’s other credentials, I guess we can assume he isn’t a coin collector!