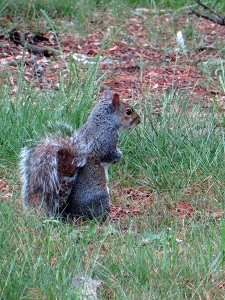 I’ve been so busy out walking around over the past week or so that I haven’t taken time out to write about any of them! Back on May 12 I organized a 5-mile urban walk along the Bluemont and Custis Trails in Arlington.

On off days I visited Kingstowne Lake and Huntley Meadows, either of which can yield a 2-3 mile stroll in a natural setting without a lot of preparation.

Last week I organized a 6.5-mile hike for about 35 hikers at Sky Meadows, a Virginia state park adjacent to  the Appalachian Trail that has quite a few trails of its own. Any time I organize a hike for others I feel obliged to hike it in advance if I haven’t visited recently and, in this case, some of the best photos were from an advance visit on Tuesday, since the actual hike on Saturday was overcast. 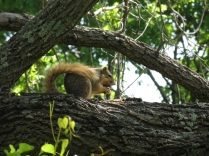 An interesting spot along this hike is the Piedmont Overlook. From the message on the plaque — “May the winds carry our ashes to the fields we fought to protect” — I have long been under the mistaken impression it was dedicated to Piedmont residents of long ago; those locals who served with John Mosby and fought against Federal troops who were ravaging the Piedmont area during the Civil War. While that would be appropriate, since the Piedmont area was referred to as “Mosby’s Confederacy,” it’s actually dedicated to those who successfully fought off the Disney troops who threatened to ravage the Piedmont area during the 1990s, with the backing and collusion of both Governor Wilder (D) and Governor-Elect Allen (R). Thank goodness they were successful fending off Disney’s America that time around, but the idea keeps popping up, with advocates pointing to any other development in the area (e.g., a golf course) and suggesting that a Disney theme park wouldn’t be any different. The Mouse has loyal fans and deep pockets, and greed has no party affiliation.