The walk is about 5.75 miles and takes about 2 hours. The surface is a mix of sidewalks and dirt paths. There are many elevation changes throughout, but with the exception of one shortcut, much of it is graded, making for easier walking.

A Google map of the route is located online here, and a link to a pdf version you can download and print out to take with you during the tour is at the bottom of the page. For convenience, the maps include locations of several restaurants in the area, but their inclusion is not intended as a commercial endorsement. 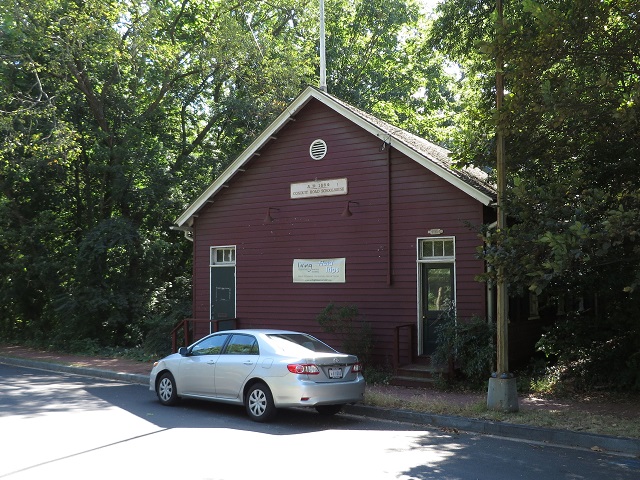 2. Conduit Road Schoolhouse, 4954 MacArthur Blvd. The Conduit Road Schoolhouse is a one-story one-room clapboard building with a brick foundation built in 1874 to replace one built 10 years earlier which had burned down. It was designed by a District of Columbia government architect and reflects bare mid-Victorian style typical of government schoolhouses in the late 1800’s. The school closed in 1928, and served as a branch of the public library. In 1965, it was saved for use as the Children’s Museum.

3. Glen Hurst, 4933 MacArthur Blvd NW, is a Queen Anne style house built in 1892 for the John C. Hurst family. Around 1890, a subdivision venture called “Palisades of the Potomac” was planned around V, W, Ashby, 48th and 49th Streets as an expensive suburb with homes of the type then being built on the Hudson above New York. The president of the venture was Washington Post founder Stilson Hutchins. Hutchins founded the newspaper in 1877, and sold it in 1889, just prior to the real estate venture. Jacob Clark and John C. Hurst, both from Canada, were the vice president and real estate broker, respectively. Richard Ough was the architect. The venture collapsed in the late 1890s due to a downturn in the real estate market. Hutchins seems to have emerged relatively unscathed — by 1911 he still was worth at least $3 million (somewhere around $1.4 billion in today’s terms), because his wife unsuccessfully sought to have him declared insane in order to get control of it.

4. Washington Psychoanalytic Institute, 4925 MacArthur Blvd NW. This house, designed by Richard Ough, is one of the first five houses built for the Palisades of the Potomac development. The homes all featured a fieldstone wall along the sidewalks.

5. Ough House, 4898 MacArthur Blvd NW. Richard Ough, the architect for the Palisades of the Potomac venture, built this Free Classic Queen Anne home in 1891 and lived here until 1894. 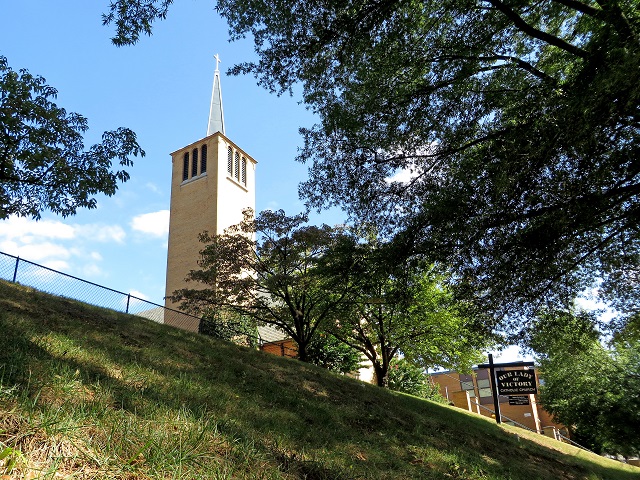 7. Drover’s Rest Tavern, 4755 Whitehaven Pkwy NW. The Drovers Rest Tavern stood where Our Lady of Victory Church is now located until around 1890. There was a huge drover’s yard at Reservoir and MacArthur where cattle and sheep were rested and fattened for slaughter after being driven on the hoof from the distant Maryland and Virginia farms. The close proximity of a stockyard to the reservoir was recognized as a threat to the Washington water supply when the reservoir went into operation in 1858. The problem was not resolved until 1890, when the property was included in the Palisades development parcels. (Glover Park History) 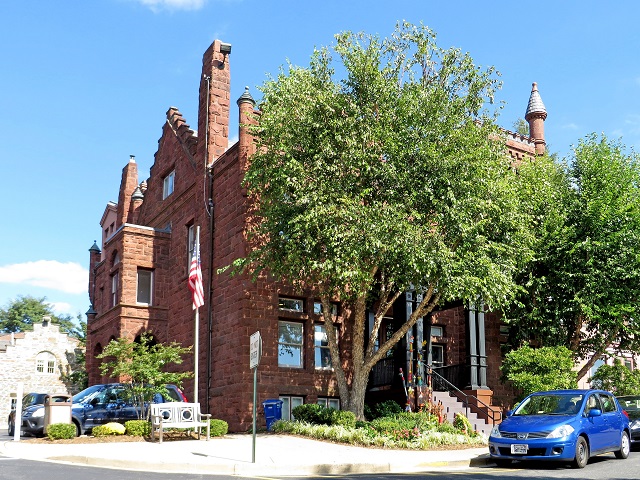 8. The Clark House, at 4759 Reservoir Road NW, is a red sandstone castellated Gothic Revival built in 1893. Jacob Clark was a partner with Hutchinson and Hurst in the 1890s “Palisades on the Potomac” development. The Clarks lived in this house until 1923, when it became the Florence Crittenton Home for Unwed Mothers of Washington DC. It became the Lab School in 1976.

9. Castle Gatehouse, 4601 MacArthur Blvd NW, is a pumping station on the Washington Aqueduct, and was constructed in 1899 at the Georgetown Reservoir to pump water into the four-mile long Washington City Tunnel that led to McMillan Reservoir, completed in 1902. http://tinyurl.com/m4lrowm

10. Washington & Great Falls Electric Railway. A trestle of this defunct railway stands in Foundry Branch Valley Park. The line was completed in 1895 and ran from Aqueduct Bridge to Cabin John Creek. During the late 1890s Congress authorized streetcar consolidations in the District of Columbia and in 1902, Washington & Great Falls changed its named to the Washington Railway & Electric Company, reincorporated as a holding company. The route was abandoned in 1960. http://tinyurl.com/myf75jj 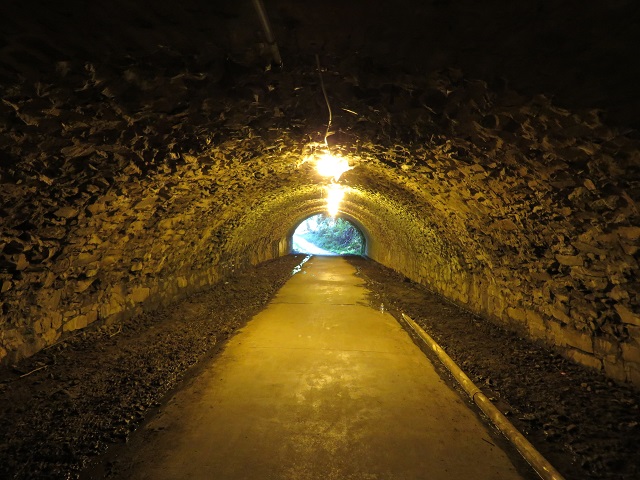 Canal Road Tunnel. Just south of the railway trestle is a pedestrian tunnel that crosses under Canal Road NW to the C&O Canal towpath and Capital Crescent Trail. The tunnel is located just east of the south exit from Foundry Branch Valley Park. 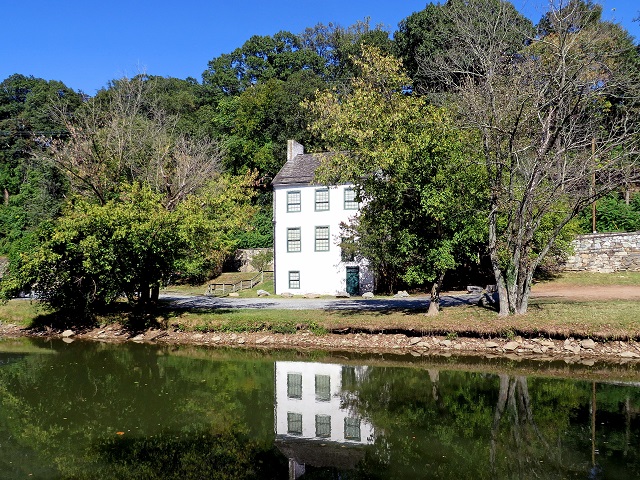 11. The Abner Cloud House, built in 1802, is the oldest existing building on the C&O Canal. Cloud built the house and nearby mill on the bank of the Little Falls Skirting Canal, and provided grain and flour to Washington before and during the operation of the C&O Canal. Cloud was related to the Pierces of Rock Creek, who owned the Pierce Mill. Cloud died in 1812, but the mill continued to provide excellent quality flour called “Evermay” to Washington until it closed in 1870. http://tinyurl.com/k5sj6gq

12. Fletchers Boathouse, 4940 Canal Road. Fletcher’s Boathouse has been in this location since the 1850s as a fishing and recreational area. It was once operated by Julius Fletcher, grandson of the founder. After 145 years of business, the fourth generation of the Fletcher family retired in 2004 and a National Park Service concessionaire operates the facility. http://tinyurl.com/mj5p4dx 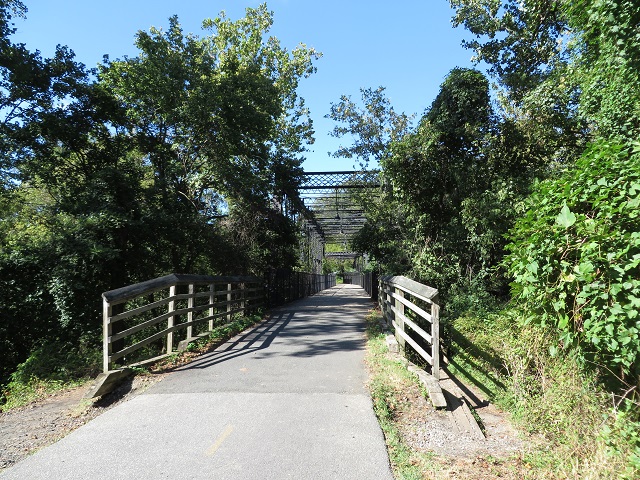 13. Capital Crescent Trail. The trail runs on the abandoned right-of-way of the Georgetown Branch rail line of the B&O Railroad. The rail line was partially built in 1892 and completed in 1910. Trains stopped running on the line in 1985. The photo is of the bridge over the C&O Canal and Arizona Ave NW.

The “Palisades on the Potomac” poster is from the Library of Congress, American Memory. Photos of the Washington Psychoanalytic Institute and the Ough House are from The Palisades of Washington, Part 3, by Alice Fales Stewart. The photo of the old wagon road is from Google street view. All other photos are by the author. Notes on the locations are from Wikipedia and other sources as noted. The single most comprehensive narrative about the Palisades and the “Palisade on the Potomac” venture is the 2005 National Register of Historic Places application for Glen Hurst, available here in pdf format.

4 Responses to The Palisades