Last weekend was the start of peak Fall colors along the eastern seaboard of the mid-Atlantic coast, and I tried to maximize the occasion with back-to-back hikes on Saturday and Sunday.

Saturday’s outing was to Riverbend Park in Great Falls, Virginia. Like its adjacent cousin, Great Falls National Park, it offers splendid views of the Potomac River rapids, but unlike the national park, entrance to Riverbend Park is free. To make the visit easy and manageable, it was divided into two out-and-back hikes. We started with a hike north to Mary Hollow and back, about 1.6 miles along the Potomac Heritage Trail. 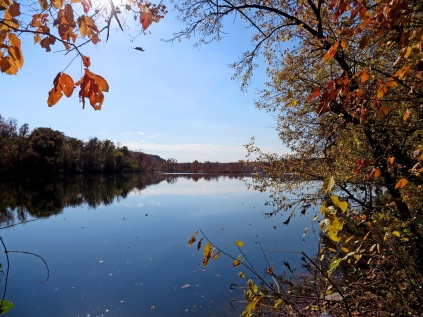 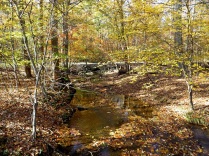 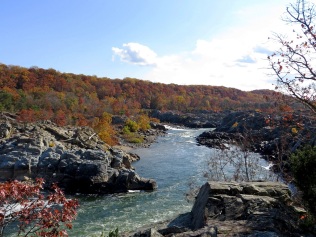 For the second half we headed south to the three overlooks of Great Falls and back, about 3.8 miles. The overlooks are inside the national park, but since you’re walking along the Potomac Heritage Trail, you’re “just passing through,” so no fees are levied. Some hikers wanted to head back immediately while others wanted to linger and enjoy the spectacular views. I didn’t want to discourage either option (hence the out-and-back route), so I gathered those who wanted to return and arrived back at the Visitor Center after a few of the faster hikers, but still wound up waiting there about an hour for the rest to return. The total hike was 5.4 miles along fairly flat dirt surfaces, and a map of our route is here. 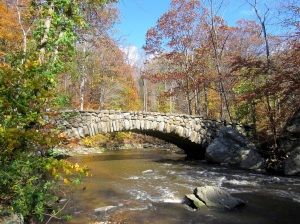 Sunday’s outing mixed it up a little with a visit to Rock Creek Park in Washington, DC. The last time we visited was back in November 2012, so I used pretty much the same route. Starting from the Cleveland Park Metro Station on Connecticut Avenue, we walked north a couple of blocks to enter the park along Melvin Hazen Trail. The minute you turn off the sidewalk, it’s hard to believe you’re in the middle of the Nation’s Capital! Seems like I underestimated the distance last time around, because this time the total distance was about 5.5 miles. A map of our route is here.

After descending to the streambed along Melvin Hazen Trail, our route took us north through the park about 2.5 miles, crossing over Rock Creek at one point along Boulder Bridge. The bridge, constructed in 1902, is a Melan reinforced concrete arch bridge with a unique boulder facing that blends into the bridge’s surroundings. 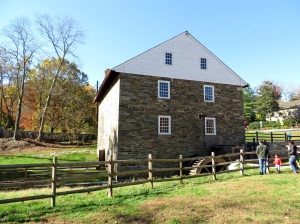 Another landmark along our route was Peirce Mill, built in the 1820s. The mill was productively grinding wheat for local farmers until the 1890s, when the US Government purchased it as part of Rock Creek Park. It has hardly produced an honest bag of flour since. Hard economic times seem to always be good news for the mill, though: it was renovated twice under public works projects auspices, first at a cost of $26,000 as part of the Public Works Administration in 1936, which enabled it to produce flour for government cafeterias until 1958, when a lack of flowing water and trained millers idled it. Most recently it was rebuilt again at a cost of around $1.5 million as part of the American Recovery and Reinvestment Act in 2011, but since it is artificially powered by pumped water, it isn’t practical to produce flour except for demonstration purposes.

There’s about one more week of fall colors remaining, so I already have two hikes scheduled over the three-day holiday weekend, one to Burke Lake on Saturday and a second to Forts Foote and Washington on Veterans Day. I’d like to do a third, but I’m a little under the weather at the moment so I’ll have to leave it at two and see if I feel up to a third after taking it easy for a couple of days.

2 Responses to Fall colors at Riverbend and Rock Creek parks