Persistence is the word that comes to mind when looking back over the past couple of weekends’ hikes: the persistence of  a cold Winter, as it drags through February and probably at least halfway through March, and the persistence of the Alexandria Walking & Hiking Group, as members continue to turn out in sizable numbers to get some exercise, despite the cold weather and sometimes snowy and/or muddy surfaces. 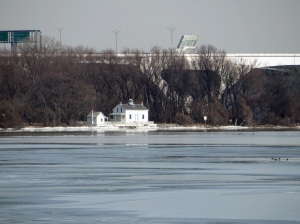 Back on February 1st we started from Jones Point and walked south along the Potomac River to Dyke Marsh and back, a total of 5 miles. Ice and mud weren’t a problem, since half of our route was paved, along the Mount Vernon Trail, and the other half was fine gravel and a stretch of boardwalk, along the Dyke Marsh Trail. Although Dyke Marsh is home to many types of birds, the main group didn’t see too many, probably because we didn’t start until 10 am. However, when the main group turned back towards Jones Point, a few hikers stayed behind in Dyke Marsh and took some wonderful photos, with the assistance of a park ranger who happened to be out on the trail. Fortunately I’ve arranged for a couple of early morning outings in March with the Friends of Dyke Marsh, so there’s still a chance for the hikers who missed seeing the wildlife to have a second try. 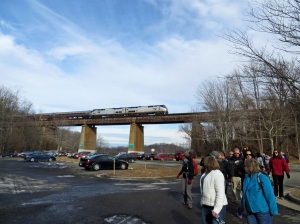 The next day I had planned a 5-mile hike around Lake Accotink, but one of our group lives nearby and alerted me that part of the trail around the lake was pretty muddy. Not to worry, though, because I simply changed our route: instead of heading north and around the lake, we went the other direction along the Cross County Trail, which is paved and follows Accotink Creek south from the railroad trestle bridge near the lake dam’s spillway. The Cross Country Trail is a valuable asset in Fairfax County, since it provides miles of wooded trails for urban dwellers to get a taste of nature without driving far.

Last weekend there was snow in the forecast, so I again opted for paved trails to keep us from slogging around in the mud. Saturday was a hike around Lake Mercer, with a short excursion along South Run Trail halfway through the loop, just to make sure we got in our 5 miles! Lake Mercer was almost completely frozen, but our group set a pretty fast pace so we weren’t cold at all.

Sunday it was back to Old Town Alexandria, for a 5-mile walk around town. Back in January I hosted a couple of walks around Old Town focused on all the historic landmarks, but this walk was not so scripted. Instead we followed a familiar route, plus we climbed up Shuter’s Hill to see Fort Ellsworth, one of the Civil War fortifications of Washington DC, and walked around to the east side of the George Washington Masonic National Memorial, where

there is a marvelous panoramic view of Old Town. So marvelous, in fact, that one of Matthew Brady’s photographers visited the site in 1864 to take a panoramic photo of the same view, which then included the campsite of the 44th New York Volunteer Infantry, nicknamed “Ellsworth Avengers” or “People’s Ellsworth Regiment,” after Colonel Elmer Ellsworth, the first Union officer killed in the Civil War.

I can already see that this coming weekend will be another round of persistence. There’s 30 hikers already signed up for a 6-mile hike on Saturday from Jones Point across Wilson Bridge to National Harbor and back, but there’s also 4-10 inches of snow falling even as I write!