A last look at the falling blossoms

Last Sunday I scheduled a 4-mile walk on the National Mall for the last day of the National Cherry Blossom Festival, to see the long-anticipated blossoms at their fullest bloom beginning  to fall in flurries, like light pink petals of snow floating on the breeze.

Arriving early at L’Enfant Metro Station, I made my way through the narrow, lovely length of the Mary Livingstone Ripley Garden. I paused to photograph its fountain against the backdrop of the Smithsonian Arts and Industries Building, which has  been undergoing a 10-year, $55 million restoration since 2004. Seneca Quarry , 24 miles upstream on the Potomac near Riley’s Lock, originally provided the warm red sandstone for the building’s construction in 1879. The blue and yellow tiles that accent the building’s Late Victorian design are like frosting on the sandstone, giving it the look of a make-believe, life-sized gingerbread castle. Unfortunately, it will remain in the land of make-believe: this January the Smithsonian Secretary announced that despite the long, costly restoration, the building will remain closed for the foreseeable future. 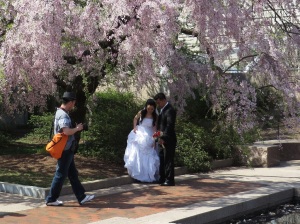 The magnolia trees in the Enid A. Haupt Garden have shed their blossoms, so vibrant last weekend, and tiny green leaves have begun to unfold. In the Moongate Garden a newlywed bride was struggling with the train of her wedding dress, while the groom looked on with anxious helplessness. The couple’s formal wear went well with the garden’s cherry blossoms, while their photographer provided a curious contrast with his blue jeans, backpack, and pork pie hat.

I sat in one of the garden’s park benches, comfortable in the shade, and hikers gradually gathered, some recognizing me and some simply seeing the red and white sign I laid out on the bench beside me. Only half the hikers that had signed up appeared; the others must have decided on something else, or were discouraged by the crowds.

After waiting an extra 10 minutes for tardy hikers, we set out west through the Mall, picking our way through the press of people. At Independence Avenue a pair of park police officers on horses stopped the pedestrians to allow cars to pass. One of the horses was huge, and seemed better suited to carrying a paladin than a policeman. Finally we were allowed to continue across the street, past the underwhelming Floral Library and into the parking area along the northeast shore of the Tidal Basin, which was taken over during the festival by a long series of concession stands and musical performance stages. 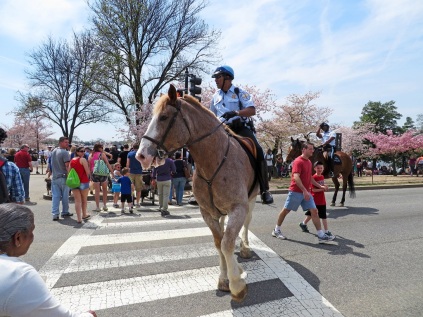 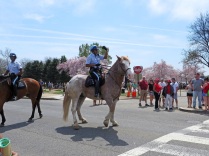 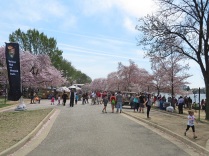 Gentle gusting breezes blew the blossoms about like snow as we walked past the performers, paddleboats and concession stands and stopped at the Jefferson Memorial to regroup. Luckily, one hiker brought a distinctive purple umbrella that served as a beacon for others struggling to catch up though the press.

The southwest shoreline was not nearly so crowded, and we easily made our way through the Franklin Delano Roosevelt Memorial and past the Martin Luther King Memorial before veering away north to the World War II Memorial. 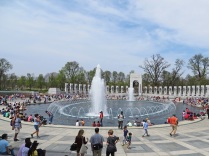 The rest of the hike was uneventful, along Constitution Avenue to pass north of the Washington Monument to walk east through the Mall, where we split up to go our separate ways. Despite the large crowds, I think this was the best cherry blossom hike I’ve ever had!