All three events last weekend had something to do with the letter “A”, and I didn’t even notice until now! (It wasn’t supposed to be some sort of Sesame Street theme.)

The Arsenal of Democracy Flyover took place in the skies over the National Mall in Washington DC on May 8, 2015, the 70th Anniversary of Victory in Europe (VE) Day. Fighting DC workday traffic to hang out with a crowd in the noontime heat on the National Mall didn’t sound too appealing, though, and when I found out the flight path would take the participating aircraft downstream along the Potomac River from Washington and over the Wilson Bridge, watching the flyover from there just came natural. 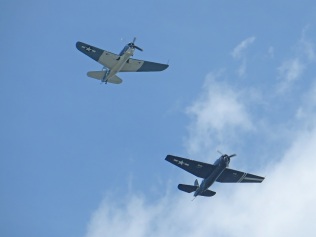 As it turned out, a couple of the formations deviated from the flight path and didn’t come down the Potomac. Most did, though, but I admit the photos are a little less than spectacular.

Incidentally, I thought “Arsenal of Democracy” was a well-chosen title, because it highlights that there can be more than one kind. By itself, an arsenal is a set of inanimate objects; it is a tool. Like any other tool, it has no inherent quality of good or evil — it can be an arsenal of democracy, as in this case, or an arsenal of tyranny. But an effective arsenal is a necessary tool: as Joe Pappalardo observed, when commenting on war in a recent article:

Despite our best wishes and peaceful intentions, someone else with a gun can shape the future. A coalition of the willing can build schools in Afghanistan, but a couple of jerks with rifles and a can of gasoline can reduce it to ashes. Sometimes, meeting violence with more effective violence is what it takes to give peace a chance.

During World War Two, our arsenal enabled us “to roll back aggression and deter aggressors, to end dictatorships, to stop genocide, [and] to protect the supply of commodities central to the nation’s interest.” Unfortunately the time needed to build an effective arsenal had to be purchased by the precious lives lost at distant places like Bataan and Guadalcanal.

A visit to the National Arboretum is a “must do” event every year around Mother’s Day, and it’s best to go really early in the morning and hopefully not on Mother’s Day itself. Accordingly, we visited the day before at 8 am and were rewarded with cool temperatures and scant competition to admire the azaleas. 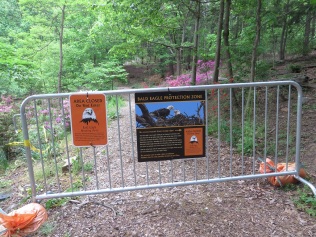 This year was notable in that bald eagles are nesting atop Mount Hamilton, so some of the paths leading through the azaleas were barricaded off to prevent visitors from disturbing the eagles. (And conversely, to protect visitors from the eagles. I’m not sure how aggressively eagles defend their nesting sites, but it’s not something I’d care to test, either!)

It’s a good thing these eagles chose to nest here. Had they chosen to nest near a wind farm they would have little to no protection, because of an Interior Department’s eagle “take” rule finalized last December that would allow wind farms to kill eagles for up to 30 years. How they manage this rule is beyond me, given the fact that the bald eagle is protected by federal laws, including the Migratory Bird Act and the Bald and Golden Eagle Protection Act. The American Bird Conservancy (ABC) recently announced it was suing the administration over the new rule.

Sunday we took an easy stroll through the woods along one of the Accotink River’s tributaries, Long Branch. An early treat was a small herd of deer relaxing by the stream, that reluctantly got up and moseyed along as our group came up. As the morning went by we ran into quite a few other folks out for a morning stroll on Mother’s Day.

During the summer months to come we’ll have to come back to the Accotink a few times. The relatively flat trails are easily accessible and provide cool, shady relief from late summer heat.

4 Responses to Three A weekend