El Galeón and a Super Moon

Last weekend we had a visit from El Galeón Andalucia, a full-size replica of a 16th century Spanish galleon. The ship docked at the Alexandria Waterfront from 9 to 14 November as  one of her stops along a journey up and down the Eastern U.S. Coast. As luck would have it, her visit coincided with the November full moon, which was billed as being the closest to Earth since the full moon of January 26, 1948.

From the press pack at the NAO Victoria Foundation website, El Galeón is a replica of the type of ship used by the Spanish Crown for maritime expeditions during the 16th-18th centuries. She is a 3-masted, 500-ton galleon; 164 feet long, 34 feet wide, and has a draft of 10.5 feet. Since her launch in 2009, a crew of 15-35 has sailed her to ports of call ranging from the Philippines to the United States. (No circumnavigation or breadfruit runs, though.)

I had originally planned a 5-mile Sunday evening walk around Old Town Alexandria to enjoy the supermoon, but because of El Galeón’s visit, I added an additional morning event to get a look at her during daylight hours. I was half expecting to see some Zinn acolytes turned out to protest Spanish colonialism, but after last Tuesday’s election, there must have been more pressing perceived outrages elsewhere. Instead, the Sunday morning crowd yielded a more Disneyesque experience: hundreds queued up to go aboard, snoop around, and have optional family photos taken on the quarterdeck, complete with conquistador helmets and pirate costumes. 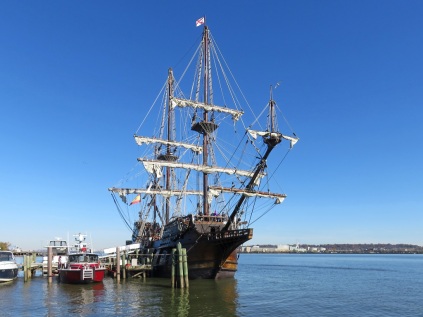 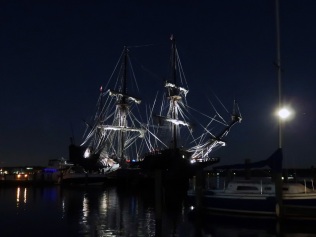 It’s not that there’s anything wrong with that, but I much preferred coming back after nightfall. If more is left to your imagination, you can fill in whatever details you like.

3 Responses to El Galeón and a Super Moon