Christmas in the City – National Mall

What better way to spend the last beautiful Sunday before Christmas than a walk around the National Mall in Washington DC?!

About 70 locals gathered at the Smithsonian Metro exit on the Mall, where I took the opportunity to pass out some cream cheese pumpkin bites as a Christmas treat for the group. (Unfortunately, I was left with quite a few.) After everyone finished their snack, we departed west on our route, which took us past many of the sights on the west end of the National Mall.

Our first stop was the Washington Monument, which is still closed due to the earthquake in August 2011. That doesn’t stop people from posing for cameras, pretending to hold the monument in their hands. It’s fortunate it isn’t leaning like the Tower of Pisa, or there would be twice as many people out there pretending to hold it up.

The World War Two Memorial is particularly beautiful when there is a bright blue sky. In contrast, the District of Columbia World War One Memorial (there isn’t a National one on the Mall) sits forlorn and relatively unvisited in the woods just to the west. It would be nice to rededicate this as the National World War One Memorial, since it is appropriately near the other war memorials on the Mall, but it is being held hostage by DC political leaders, who are using it as a poster child for DC statehood. 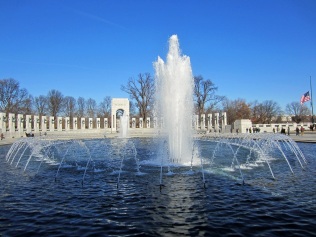 We continued west past the Korean War Memorial to the Lincoln Memorial, where we paused for about 10 minutes so everyone could climb the steps and enjoy the view, both inside and out. There’s always a crowd there, so keeping the group together would have been impossible! 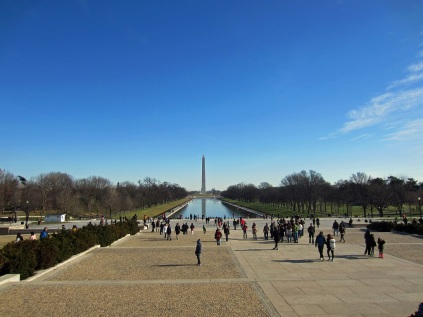 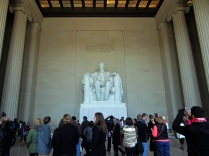 Reassembling, we turned back east to walk through the Vietnam Veterans Memorial, which strangely isn’t called a war memorial like the others, and past Constitution Garden to reach the National Christmas Tree in the White House Ellipse. Quite a crowd was gathered there also, checking out the model trains chuffing around at the base of the tree. Many of the trains were towing flatcars with baskets in them to collect visitors’ coins, leading one wag in our group to speculate whether they were the only White House effort to reduce the national debt. 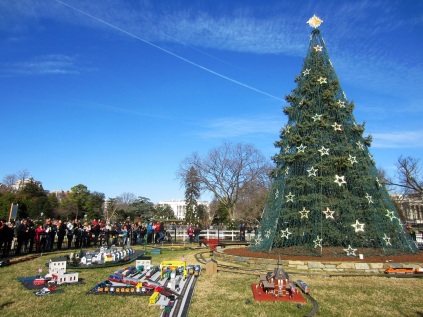