This past weekend presented a study in contrasts. Saturday was sunny, clear and warm, and a big group of hikers turned out for a moderate to strenuous hike over rocky, hilly terrain, while Sunday was overcast, rainy and cold, and only a few hikers braved the elements for a fairly easy (albeit muddy) hike over undulating wooded hills.

Saturday’s hike was to ever-popular Great Falls National Park , on the Virginia bank of the Potomac about 20 miles upstream from Washington DC. Our route was basically a loop leading from the Visitor Center southeast along the Matildaville Trail, named for the former town of the same name that was established in 1790 as an industrial hub supporting the Potowmack Canal. Matildaville did not live much past the closing of the Potowmack Canal Company in 1828, and all that remains is scattered ruins. At the end of the Matildaville Trail we interrupted the loop to hike further southeast to Difficult Run and follow it upstream to Georgetown Pike and back before continuing our loop. The return leg of the loop took us up the River Trail, along the top of sheer cliffs that line the banks of the Potomac through Mather Gorge, before ending at the Great Falls overlook near our starting point. 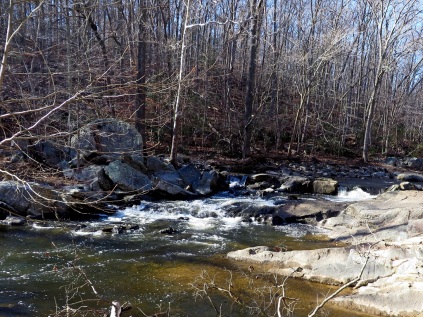 A nice 5-mile hike, with several rock scrambles and beautiful views throughout. I didn’t count noses or anything, but lots of hikers participated; familiar friends and pleasant conversations.

Sunday’s hike was a different story altogether. The forecast was for rain and a high of only 41 degrees, but after the effort of reconnoitering the route and setting up a wine tasting afterwards at nearby Paradise Springs Winery, I was unwilling to cancel the event unless there was a safety concern like ice or thunderstorms. Sure enough, the forecast was right! The hike started from Hemlock Overlook Regional Park, on the banks of Bull Run, only a few miles downstream from the Civil War battlefield of Manassas.* Our route led upstream only about a mile and a third to Pope’s Head Creek, where we had to turn around early because one of the stepping stones leading across the creek had washed away. To make up the distance, we hiked an extra couple of miles downstream and along a horse trail to return to our starting point.

Because of the detour, the hike was only about 4.5 miles of sloshing through slippery mud puddles and hopping from rock to rock. Because of the nasty weather, only five hikers participated and we all ended up thoroughly drenched! There was one cool and noteworthy event: one of our hikers spotted a stone point in the muddy streambed. Being a former archaeologist, she was able to show us its characteristics and describe how it was made. I was amazed she was even able to spot it!

Despite the contrasts between warm and cold, sunny and overcast, and clear versus rain, there was one similarity between the two hikes: both featured a super fun bunch of hikers!

* First and Second Manassas, or First and Second Bull Run, if you’re a Yankee. Southerners tended to name Civil War battles after nearby communities. Northerners used terrain features for some unexplained reason, but gradually that usage has pretty much fallen away.