Last week the weather forecast for the weekend was for rain both days, all the way until Thursday-ish, when the weather mages started changing their tune. As it turned out, both days turned out to be beautiful, but the evening of each day they were still waffling around about the next day’s forecast. This put me in something of a quandary about scheduling hikes, since I hate spinning everyone up to go someplace and then having to cancel. I settled for a couple of urban hikes, so that if it rained and I didn’t cancel, we at least wouldn’t be splashing around in mud puddles.

Saturday we walked around Old Town Alexandria, which always yields a nice walk, rain or shine. My favorite route starts near the King Street Metro station, which is handy for the “metronians,” and heads southeast past Hooff’s Run Bridge before turning east to the waterfront along Wilkes Street. Arriving at the waterfront after going through the Wilkes Street Tunnel, it turns north all the way up the waterfront to Tidelock Park before returning south to King Street, and then west back to the starting point. The last leg along King Street takes you past almost every sort of restaurant imaginable, if you haven’t decided on a lunch spot. 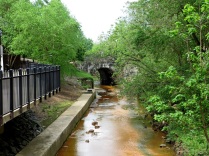 Sunday was a return to Washington D.C. for a walk around the National Mall, taking in the many fountains and gardens scattered around the area. We’ve done this hike many times before, always around mid-May, and it dovetails nicely with the walk around East Capitol Hill neighborhood we did the week before . The only hitch is, you need a sunny day for the visit, since you’ll probably be taking lots of photos. As it turned, out a sunny day is just what we got. The route, which starts and ends at Union Station, is here. 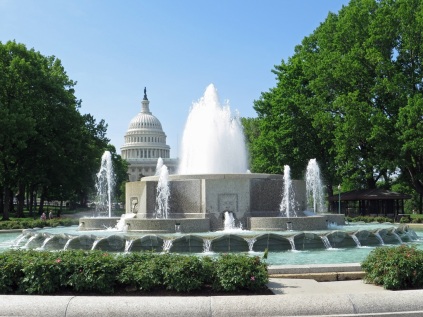 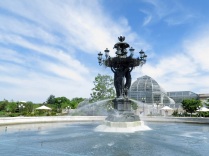 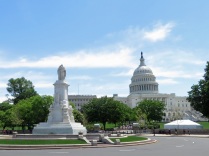 I thought I would reserve one sculpture for comment, since it seems so out of place.

“Man Controlling Trade,” located by the Federal Trade Commission Building, is a pair of equestrian statues created by Michael Lantz in 1942. They have a blocky, cartoonish feel reminiscent of New Deal or Soviet propaganda (but I repeat myself). This is hardly surprising, since they were a product of the New Deal: the Works Progress Administration’s Federal Art Project. The message they seem to convey is that trade is a wild animal, rather than the free exchange of goods and services between millions of free people that it actually is. The idea that a single entity (the government) should control trade might be appropriate to a socialist or communist society, but it runs counter to the free society for which the United States stands. For that reason, these two statues are even more out of place than some of the modern art statues found here and there around the National Mall, which at least symbolize free thought. They would be more at home in the Red Square.