On our way to the park we passed through Delaplane, VA, which during the American Civil War was called Piedmont Station.  In 1861, troops from Confederate General J.E. Johnston’s Army of the Shenandoah boarded the train at Piedmont Station for a 30-mile ride to Manassas Station, where they arrived just in time to turn the tide of battle at the Battle of First Manassas, July 21st, 1861. Among those boarding the train were General Thomas J. Jackson’s Virginia Brigade, and it was during the battle at Henry House Hill that both Jackson and his brigade earned the sobriquet “Stonewall.” 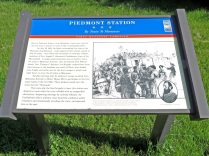 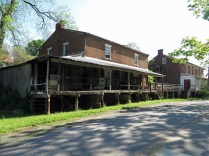 Piedmont Station and its adjacent country store are essentially unchanged since the Civil War, except they now house an antique store. While I was stopped for a look, a Norfolk Southern freight train obligingly passed through the station, providing sounds and vibrations similar to those felt by those standing in the same spot 150 years ago. (Only somewhat similar, of course: in 1861 the engines were steam, rather than diesel, and not nearly so powerful.)

Only a few miles further north along Virginia Route 17 is Sky Meadows State Park. The park rangers were only just arriving at the historic stone farm house and outbuildings when we set out on the uphill climb through the mountain meadows to the Appalachian Trail along Piedmont Overlook and Ambassador trails. 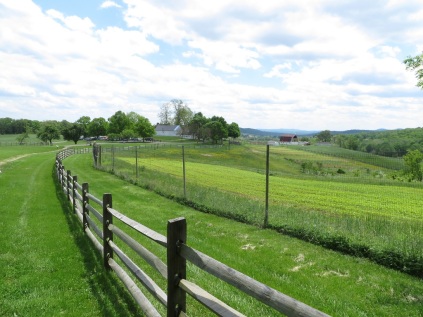 Piedmont Overlook Trail is only 0.61 miles, leads almost straight uphill through open meadows and looks deceptively easy. You notice that your breath is getting a little shorter and your legs are getting heavier as you trudge uphill, and when you turn around at one of the thoughtfully provided wooden benches for a break, you notice that the cars in the parking lot below are so small they could be Monopoly pieces. Along the way a Goldfinch and a Mountain Bluebird graciously posed near enough to our group to enable some fairly good photos. Well, at least I thought it was a Mountain Bluebird: a closer look revealed it to be an Indigo Bunting. (Eastern Bluebirds have red breasts and Mountain Bluebirds have a white underbelly, but Indigo Buntings are blue all over.) What a treat! 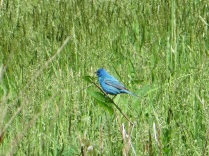 Ambassador Whitehorse Trail takes you the remaining mile or so to the Appalachian Trail, and there’s a beautiful view looking to the east from Whitehouse Overlook. There is a big boulder at the site with a plaque that reads “May the winds carry our ashes to the fields we fought to protect.” I initially thought it was dedicated to Mosby’s Rangers, which would have been appropriate considering they were active in the area and disbanded at nearby Marshall, Virginia, on April 21, 1865. In fact, though, it is dedicated to those active in protecting the area from modern development. A bunch of other plaques have been tacked to other nearby boulders, each dedicated to a specific individual, which ironically seems to be the sort of encroachment they were trying to prevent. But at least they aren’t a “See Rock City“ barn or something. 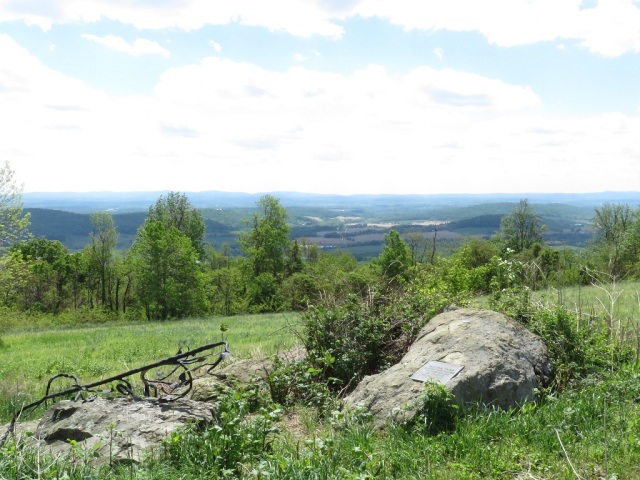 Once we reached the Appalachian Trail, the rest of the 6.5 mile route we took was pretty easy going: a couple of miles along the Appalachian Trail, and then downhill along North Ridge and South Ridge trails, past the ruins of Snowden Manor, and along Boston Mill Road to return to our starting point in the Historic Area. 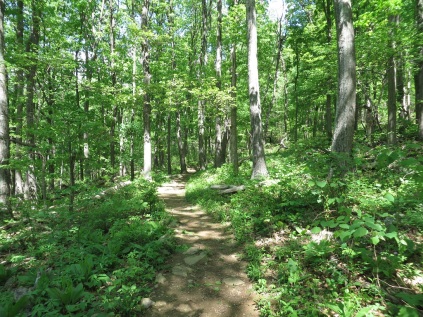 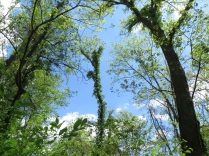 What a fun hike, and what a fantastic bunch of friendly hikers! After the hike, some folks stopped at Three Fox Vineyards in Delaplane for a taste of their wines. As for me, seeing the Indigo Bunting that I thought was a bluebird reminded me of a spot I have seen the real Eastern Bluebird: Meadowood Recreation Area in Lorton, VA. I think it’s time for another hike!

A Google map of our route and historical markers in the surrounding area is here, and there is a pdf trail map here.