This past Friday I drove out to Shenandoah National Park to reconnoiter an upcoming hike near the Harry F. Byrd, Sr. Visitor Center, in the Big Meadows area of the park.

The planned hike is a counter-clockwise loop, about 5 miles of smiles, although the elevations changes and inevitable twists and turns along the trail run the distance a bit higher. (Your mileage may vary, as the disclaimer reads.) The surface is dirt woodland paths, often rough, rocky and rooty, descends about 1200 feet to Rose River and the same amount back up, plus a bit, before returning to the starting point elevation. 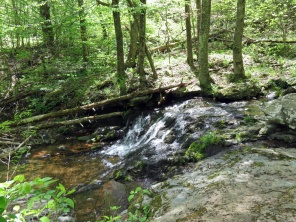 Below Dark Hollow Falls the trail intersects the Rose River Fire Road, and after turning right and following the road across a footbridge over Hogback Branch, a left turn puts you onto the Rose River Loop Trail. The trail follows Hogback Branch downstream about 0.8 of a mile before recrossing Hogback Branch on another footbridge. After crossing the bridge, keep an eye out for the trail blazes: next to a crumbling old concrete base for an air compressor that was once used by the Rose River Copper Mine, the trail turns right — the seeming “trail” of pale blue-gray rock chips that goes uphill simply leads to the old mine shaft, which is now filled in.1 Shortly after the turn the trail turns left and parallels Rose River upstream to Rose River Falls, which makes a good place for a break.

A black bear just happened to be hanging out near the Rose River Copper Mine, the first I have seen up close since running into a pair of black bear cubs near North Marshall Mountain late in 2013. Black bears are not an endangered species, and they are the most numerous of all bears, but you don’t get this close to one just any day of the week! 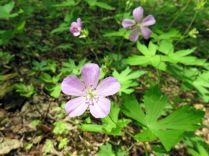 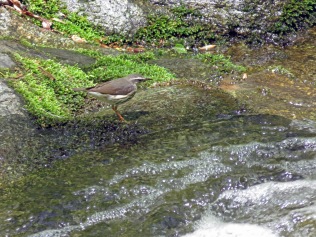 After the Rose River Falls, it’s an uphill slog for much of the rest of the hike, mostly over rooty, rocky trails. The remaining mile and a half of the Rose River Loop Trail features a couple of switchbacks before intersecting the Skyland/Big Meadows Horse Trail, and a left turn takes you almost all the rest of the way up to Skyline Drive, where the horse trail crosses Rose River Fire Road.

The Rose River Fire Road was once part of the Gordonsville New Market Turnpike, which was in use from 1853 until about 1867. The Blue Ridge Turnpike Company2 operated a stagecoach line to convey travelers along the turnpike between Winchester and Richmond, but the turnpike’s most notable use was by Confederate General Stonewall Jackson’s II Corps. After the Battle of Antietam in September 1862, Jackson’s Corps retired up the Shenandoah Valley to recuperate while the rest of Confederate General Robert E. Lee’s Army of Northern Virginia took up positions east of the mountains. In mid-November, Union General Ambrose Burnside advanced the Union Army of the Potomac to the banks of the Rappahannock River, and Lee moved to block him. Lee called on Jackson to rejoin the main army, and on November 21 Jackson’s Corps took the turnpike through the mountains and rejoined Lee’s army in time to participate in the Battle of Fredericksburg on December 13.3

The stretch along the horse trail is about 2 miles of rough uphill hiking, so for some relief, a short detour along the fire road across Skyline Drive allows a break to enjoy the view from Fishers Gap Overlook. 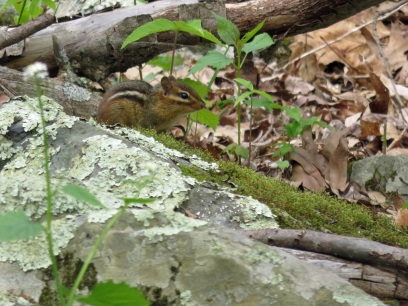 From Fishers Gap Overlook, a 200-foot walk southwest along Skyline Drive reconnects to the horse trail. Turn right and follow the horse trail the final 1.25 miles southwest to the Song of the Forest Trail. From there a left turn onto the Song of the Forest Trail and a short 0.2 of a mile walk, recrossing Skyline Drive, ends the hike back at the starting point at Dark Hollow Falls Trailhead.

All told, an enjoyable hike! The second half is a little challenging since it’s almost all uphill, but the total distance is short enough that the hike is not too difficult.