As the weeks go by, the “wonder” part of “winter wonderland” seems to be wondering just how much longer before winter eases its grip on us. Not just yet, anyway.

Last weekend we went on a 6-mile hike along the Billy Goat Trail, sections B and C, at Carderock, Maryland. I purposely broke the hike into two legs, one for each section, so hikers could opt out after one of the sections if they had other things to do. It looked like a fairly seasonable morning, as far as temperatures go, since the mercury got up to the low 50s, but looks can be deceptive: the C&O Canal, while not frozen solid, had a very thick layer of ice on top. Some of our hikers tossed a few stones of varying sizes out onto the ice to see if any would break through, with no success.

The water temperature wasn’t cold enough to dissuade a couple of paddleboarders from testing the rapids on the Potomac. The rapids themselves are dangerous enough — a kayaker was lost at nearby Great Falls last July — but the low water temperature adds another dangerous dimension. It looked like the paddle boarders were wearing wetsuits, but survival time immersed in freezing water is pretty short. “Generally, a person can survive in 41-degree F (5-degree C) water for 10, 15 or 20 minutes before the muscles get weak, you lose coordination and strength, which happens because the blood moves away from the extremities and toward the center, or core, of the body.” (Scientific American)

Onshore, our travails were limited to mud on the trail and the usual rock scramble here and there. Carderock is becoming one of my favorite spots for a pleasant morning outing in a natural setting that is close enough to get to without a long drive, and leaves time enough to still run the usual weekend errands during the afternoon after the hike. 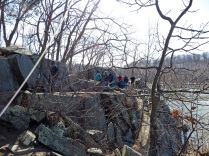 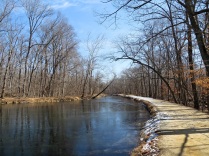 The following day we took advantage of the seasonable weather for another 6-mile hike along the Mount Vernon Trail, but that was the end of our false spring: it began raining immediately after the hike, followed by snow starting during the night. It’s been snowing steady all morning, and there’s no end in sight until sometime Monday night. It’s a good thing that my weekend errands included a trip to the grocery store!

Postscript: Meetup, the outstanding online event support resource that hosts my hiking group, has been under a denial of service attack since last Thursday. Their technicians have been at it around the clock since then fighting it off, with mixed success, but I may have to figure out an alternative to post hike information in case Meetup gets clobbered. While this blog isn’t configured for event support (calendaring, signups and reservations, etc.), hikers would at least be able to look up the event details if Meetup is down. We’ll see.